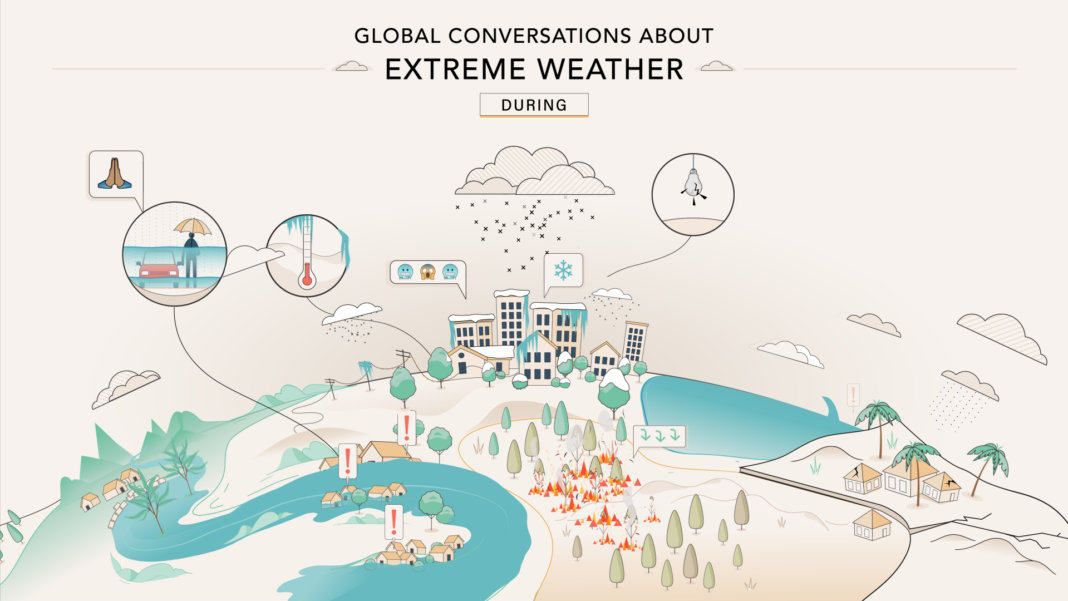 Climate change has contributed to extreme weather around the world, fuelling an increased number of phenomena like deadly floods, wildfires, and frequent typhoons. As extreme weather unfolds across the globe, people come to Twitter before, during, and after these events to talk about what’s happening. Powered by social insights and analytics, these real-time conversations can be harnessed to provide instant alerts, relief efforts, and assessment of the situation on ground.

Twitter provides companies and individuals with programmatic access to Twitter data through its public application programming interfaces (APIs), allowing them to build apps and tools for consumers to draw insights out of Twitter. Following natural disasters including the Jakarta flooding in Indonesia, Australian bushfires, and Typhoon Hagibis in Japan, Twitter worked with Peta Bencana and Twitter Official Partners like Brandwatch to help local communities understand trends in conversation data. In addition to using the service to share resources, raise funds and rally around one another, the Tweets create a wealth of social data that can be used to understand the issue of climate change and the crisis more broadly, while enabling policy makers to respond to future climate emergencies. 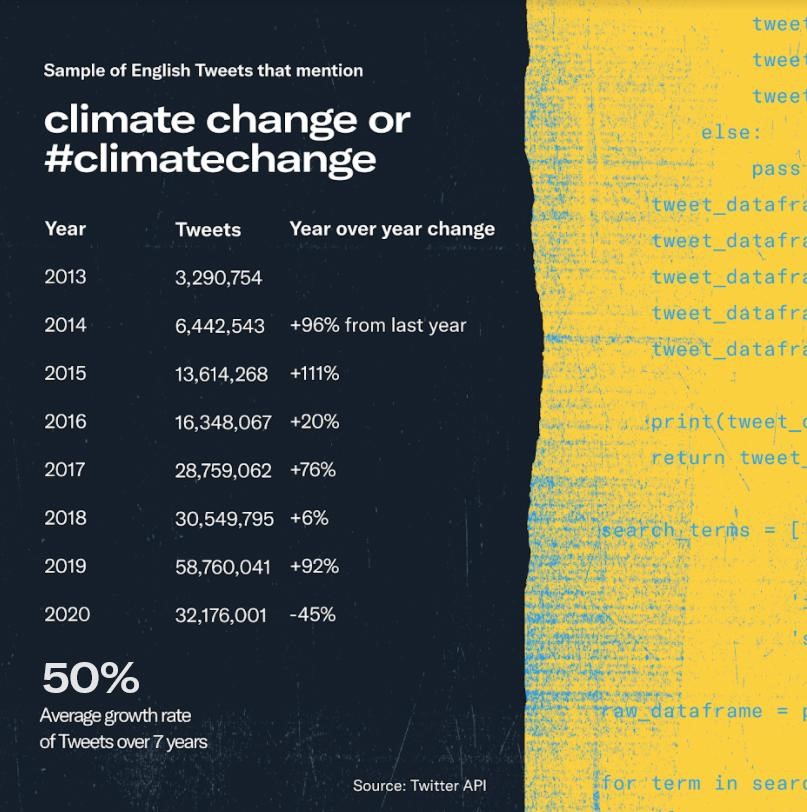 In collaboration with award-winning creative studio Design I/O, Twitter has unveiled an interactive webpage to explore how conversations evolved on Twitter during each extreme weather event. The key moments are summarized as follows:

The Intergovernmental Panel on Climate Change (IPCC), the United Nations’ climate science research group, recently concluded in a report that human-induced climate change is already affecting many weather and climate extremes in every region across the globe – including increases in the frequency and intensity of hot extremes, marine heatwaves, and heavy precipitation.

The extent of extreme weather events is reflected in public conversations on Twitter too. A sample of English-language Tweets from 2013 to 2020 indicated that mentions of “climate change” grew an average of 50% over seven years.

These Tweets have proven to be powerful and influential as environmental activists use Twitter to raise awareness about the climate crisis, organize their communities, and connect with others passionate about protecting the planet.

“Developers consistently inspire us with the ways they support people in crisis during natural disasters. The #ExtremeWeather visualization showcases what can be achieved when our developer and partner communities leverage the Twitter API and apply these insights to the public good. We hope this work sparks conversation, increases awareness and creates a connection between those passionate about climate change and disaster relief,” said Amy Udelson, Head of Marketing for the Twitter Developer Platform.

By utilizing the vast amount of data about public conversation that Twitter provides, developers have the opportunity to build solutions that can help local communities during unforeseen extreme weather events, or study public sentiments about climate change without human bias.

Addressing the climate emergency together

Home to more than half of the world’s population, the Asia Pacific region is one of the most vulnerable to the devastating effects of climate change. Twitter has played a critical role in providing actionable information during extreme weather events, and can continue to do so with the support and commitment from developers who are passionate about building for the climate crisis.

“Twitter’s uniquely open service has been used by people all around the world to share and exchange information in times of crisis. We recognize our responsibility in ensuring that people can find the information they need especially during a natural disaster, and have worked to amplify credible information from trusted media, government agencies, as well as relief and volunteer organizations,” said Kathleen Reen, Senior Director Public Policy and Philanthropy, Asia Pacific at Twitter. “We’ve seen how Twitter data can be used in real-time to provide vital support to people on the ground, and raise broader awareness and understanding of the impact of a crisis. As always, we remain committed to empowering more people to play an active role in driving positive social change, alongside our partners.”

In January 2020, a record-breaking rainfall inundated Jakarta, Indonesia with more water than its infrastructure could handle. Severe flooding affected large parts of the capital city, injuring dozens and displacing thousands. As water rose and blocked roads, shut down one of the city’s airports, and cut off electricity, residents continued to search for and share up-to-date information through Twitter. In the first week of January 2020, there were over 20,000 Tweets made in Jakarta about the floods.

To quickly crowdsource public Tweets about what was happening, Peta Bencana developed a Twitter “humanitarian bot,” using an open-source software called CogniCity. This bot listens for Tweets to the @PetaBencana account with flood and disaster related keywords (such as “banjir”, flood in Bahasa Indonesia) from the people across Indonesia, and automatically responds with a Tweet with instructions on how to share observations, using this information to create a flood map.

The flood map provided by Peta Bencana was accessed over 259,000 times during the peak of flooding, a 24,000% increase in activity within a week. Residents checked the map to understand the flooding situation, avoid flooded areas, and make decisions about safety and response.

The Jakarta Emergency Management Agency (BPBD DKI Jakarta) also monitored the map to address resident needs, and coordinate their rescue response based on reported severity and need. As waters receded or support arrived, they kept it up to date with information about flood-affected neighbourhoods.

Before the global pandemic took hold in 2020, many in Australia were already contending with grave danger. From June 2019 to March 2020, the fires in Australia burned 13.6 million acres in New South Wales, devastating the wildlife and ecology of the region (NYT, 2020).

Brandwatch, a Twitter Official Partner, analysed the conversation during this event on Twitter, including 2.8 million people around the world engaged in conversations and nearly 10 million public Tweets related to the bushfires from December 2019 to March 2020.

People used the service to connect in powerful ways. Communities united over mutual aid and fundraising efforts such as #AuthorsForFireys auctions and the ‘Find a Bed’ movement to find emergency accommodation for those displaced by the bushfires. Within a week of its launch, Find A Bed had accrued 7,000 listings and housed around 100 people, including a 104-year-old who lost her house.

In 2019, Northern Japan was hit by the devastating Typhoon Hagibis, which generated 3 feet of rain in 24 hours in some regions, flash floods, and 74 lives lost (NHK, 2019). The Typhoon’s heavy rains caused more than 20 rivers in Japan to overflow quickly and inhabitants were helplessly forced to leave their homes for higher ground.

A Twitter Official Partner analyzed Twitter to detect keywords related to flooding, earthquakes, power outages and other disasters; their partner JX Press provided fast alerts, averaging 20 to 45 minutes before many Japanese news outlets. With this type of access to Twitter data, governments can more effectively listen and speak during emergencies, as well as analyze data about how people are being affected.