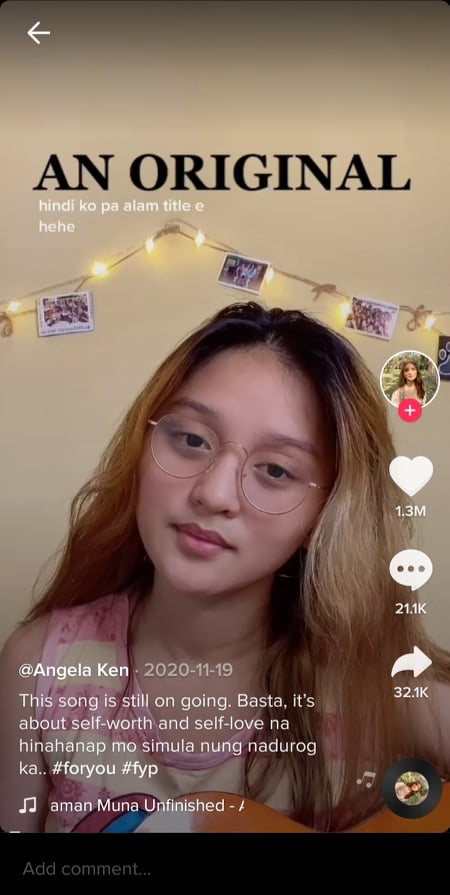 The aspiring singer-songwriter started her career by posting snippets of her music on the platform!

Manila, Philippines – March 22, 2021 – 18-year old Angela Rojas is one of the most promising young talents seen on TikTok today. Known online as Angela Ken, this TikTok success story started out the same way many musicians on the platform do, posting covers and snippets of her original compositions.

From a young age, Angela was already musically inclined. She even wrote her first composition, a worship song, at the age of 12. But when she first started using TikTok, Angela didn’t think that she would actually start sharing her talents with others on the platform. “Last year, I started making song covers and dances on TikTok just for fun. Until I uploaded one of my originals on TikTok last September, and I didn’t expect all the blessings that will shower upon me,” Angela says.

The original song that she posted is a track called “Ako Naman Muna“, which roughly translates to This Time I Come First, an alluring and relatable tune about self-love. Though she only shared a preview of this composition on TikTok, it quickly went viral on the app. Resonating with a multitude of audiences, it was eventually shared on other social media platforms as well.

According to Angela, she was at a low point in her life when she wrote the song, and was even in tears while writing the first verse. “The story behind ‘Ako Naman Muna’ is very personal and special to me,” she shares. “I felt unproductive, uncertain and lost because I can’t do the things I used to do, I can’t meet some of the people who makes me happy, I can’t go to the places I want to go. I felt stuck, and sadness pulled me down. That was why the first verse was that deep and relatable to reality. Until one night, I posted it and I never expected it to go viral. All I wanted was to let that song go and not finish it anymore. But I saw a lot of people feel the same way [as I did], and I don’t want that. I got inspired to make the chorus full of hope and give light to those who are in darkness.”

“Ako Naman Muna” is such a powerful song, that it eventually reached the radar of ABS-CBN’s Star Music. Angela is now a Star Magic talent,recording artist under ABS-CBN MUSIC and will soon be seen in projects and shows under Dreamscape Entertainment. She is also slated to appear as one of the new-breed singers on the musical variety show, ASAP. For Angela, getting her start on TikTok is a fulfillment of a lifelong dream, as it led the way for her to join ABS-CBN. She shares, “Ever since I was a kid, one of my dreams is to become a well known singer. I love singing because it helps me express how I feel in a unique way.”

TikTok is brimming with talents, similar to Angela, just waiting to be discovered. The platform serves as an ideal virtual stage for aspiring performers, empowering them to showcase their music, and allowing them to be heard by audiences around the world, even beyond the platform.

Follow Angela Ken and other talented musicians on TikTok! Download the app on your iOS and Android devices today to get started.