iQIYI’s summer rom-com drama “Moonlight” will be released every Thursday to Sunday at 8pm. 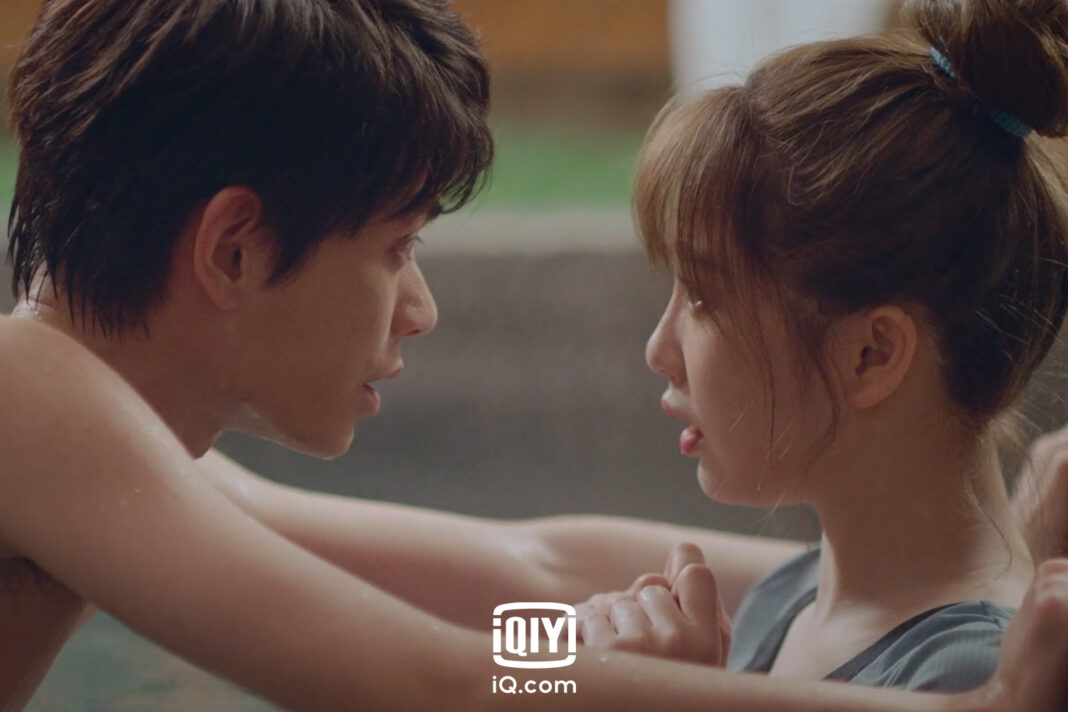 iQIYI’s summer rom-com drama “Moonlight” will be released every Thursday to Sunday at 8pm.

Classic confession line by Natsume Soseki gets thumbs up from late-night bingers.

Ryan Ding who became immensely popular after the release of drama “The Romance of Tiger and Rose” and Esther Yu who regained her popularity after joining Chinese girl group THE9 in the hit variety program “Youth With You 2” co-starred in a new rom-com drama “Moonlight”! This drama was officially released on iQiyi International on 20th May 2021, a day in which couples celebrate “520”, also known as “I love you” in the mainland of China.

The arrogant Ding continuously teases Yu by pushing her back against the wall in different backgrounds. One of the scenes that made viewers’ hearts flutter and scream is the one in the sauna room. When behind-the-scenes videos revealed the filming of these sizzling kissing scenes, Ding is seen crackling up to Yu’s sudden reaction as she blurted out like an old hand, “The cameras can’t capture our lips if we stick too close.” Two episodes of  iQIYI International’s exclusive rom-com drama “Moonlight” will be released every Thursday to Sunday at 8 p.m. while VIP members can enjoy an exclusive early access to six episodes.

The drama “Moonlight” is adapted from the popular online novel “Chu Li is Here!”. The story unfolds in a publishing company where Zhou Chuan, a budding novelist (starred by Ryan Ding) meets Chu Li, a passionate rookie editor (starred by Esther Yu). Chu Li first met Zhou Chuan when they both wanted to purchase the same Natsume Soseki novel. Little did they know, they have long been chat buddies on the internet but never met in person. As co-workers, the high-spirited lass and the arrogant acting mentor develop a fiery love-hate relationship online and offline while they work together to publish a book. Their relationship took a sweet twist when they suddenly had to live together. Ding pulled off a natural performance as the male lead with a cat personality, arrogant but at the same time gives out a sweetly funny vibe. On the other hand, Yu was adorable and down-to-earth, just as cute and kittenish as she was when she appeared in “Youth With You 2”. Good reviews kept coming in for both of them and viewers just can’t get enough of them.

In the drama, Ding plays a mysterious but low profile writer. Although his book fans call him a jade-like gentleman, to Yu, he is like an actor with two faces. Ding, who already has feelings for Yu, teases her continuously by pushing her against the wall in different scenes. One of the scenes that drove viewers crazy took place in the sauna room where Yu couldn’t stop fantasizing about them kissing. However, Ding misunderstood that she was fantasizing about other men. Ding then pushed her against the wall and looked her in the eye for 30 seconds to see if she was lying. This intimate interaction between them had been voted by fans as the best scene in the drama. In the behind-the-scenes video, although they were shy to take the sauna bath together, they couldn’t help but burst out laughing when they looked each other in the eyes. Be it off or on-screen, their interaction gave out a romantic and lovey-dovey vibe. Other than that, behind-the-scenes video also revealed that during one of the takes for a kissing scene, Yu suddenly “spoilt the mood” as she directed Ding like an old hand, “Don’t stick too close to me. The cameras can’t capture our lips if we stick too close.” And in her usual kittenish way, she quickly added, “Relax. Come on, I thought you’re a professional in kissing scenes.” Poor Ding was taken aback by her words. “If it’s too close, they can’t see our lips when we kiss,” she continued. Just like the character “Chu Li” she played in the drama, Yu is also a perfectionist who nags a lot in real life. That made the fans love her even more as they claimed that she is as adorable as she was in the variety show “Youth With You 2”.

It is also interesting to note that in the drama, Ding and Yu first met each other when they both wanted to purchase the same Natsume Soseki novel. When they started living together, one night on the way home after grocery shopping, Ding became sentimental about having company and not being lonely anymore. He looked up at the bright moon and uttered, “The moon is beautiful tonight.” As soon as he said that, both of them started to panic. As fans of Natsume Soseki, they both knew the hidden meaning behind “The moon is beautiful tonight.” When Natsume Soseki was an English teacher, he once asked his students the translation of “I love you” in Japanese. He then explained that Japanese men should confess their love by saying “(When you are around me) The moon is beautiful tonight.” Both phrases are similar phonetically and it uniquely expressed the reserved yet poetical way of how Japanese people express their love. This little plot of adapting Natsume Soseki’s way of confessing love had definitely added a refreshingly artistic overcoat to the story and kept the viewers much entertained.

Now streaming, two episodes of iQIYI International’s exclusive romance comedy drama “Moonlight” will be released every Thursday to Sunday at 8 p.m., while VIP members can enjoy an exclusive early access to six episodes.