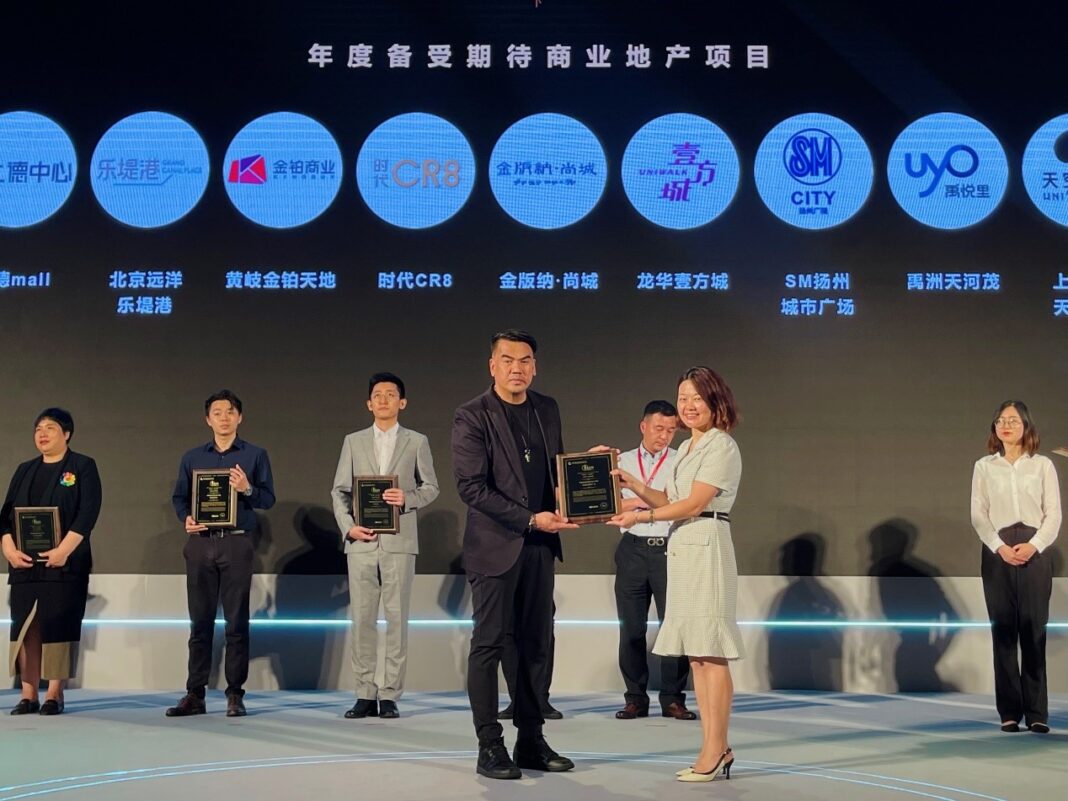 Golden Coordinate Awards of China commercial real estate industry was issued by Winshang. Among which, Golden Coordinate Awards of Annual Highly Anticipated Commercial Real Estate Project was carefully selected through comprehensive data analysis, preliminary judge and in-site evaluation that conducted by industry professionals and media. The awards, which are presented annually, aim to discover popular projects in the market that lead the new potential of Chinese business.

SM City Yangzhou, which ranked in Golden Coordinate, located on the west side of Guangling section of Beijing Hangzhou Grand Canal. It is the main shopping center of the first large-scale complex in “Ten Mile Bund” — SM Yangzhou Complex (with a total investment of 2 billion yuan). It has been roofed in October, 2020 and will be completed by the end of the year and put into operation in Q2, 2022.

The project with GFA of 230,000 sqms and design inspiration from Qiong Hua, Yangzhou City Flower, is positioned as a fashion Life Center for family. Its underground 2 floors are planned for supermarket and parking lot with over 1600 parking Spaces. The 3 floors on the ground will introduce trendy sports flagship stores, special catering, recreation services, parent-child services and other businesses.

Vertical & horizontal radiation to meet the expectations of eastern area

Nowadays, Yangzhou’s ” One Body Two Wings” overall plan is speeding up the expansion of main urban area, increasing the investment in various infrastructures of the “two wings” of the city. SM City Yangzhou is close to Yangzhou north-south expressway (North Canal Road) and the east-west main road. Once the east-west and north-south corridors of the city are connected in the future, the project can be reached in around 10 minutes from Jiangdu District in the east wing and about 20 minutes from Hanjiang District in the west. The project can also be reached within half an hour’s drive from Gaoyou in northern Jiangsu and Zhenjiang in the south.

In the Eastern Yangzhou where SM project is located, there is a lack of large-scale businesses; while the surrounding high-density housing, schools and other supporting sites can provide a relatively mature commercial market foundation. As a matter of fact, since the announcement of the SM Yangzhou project, it has been highly anticipated, which has also strengthened SM’s confidence in investment and construction.

Innovative integration of fashion and culture

Mr. Allan, Head of SM China-Operations said,” Yangzhou is a famous historical city with profound cultural deposits. With more than 60 years of expertise in retail and 30 years of shopping center operation, SM group is looking forward to bringing fashion and culture collision to the project: SM will introduce exotic characteristics and meet the local needs.”