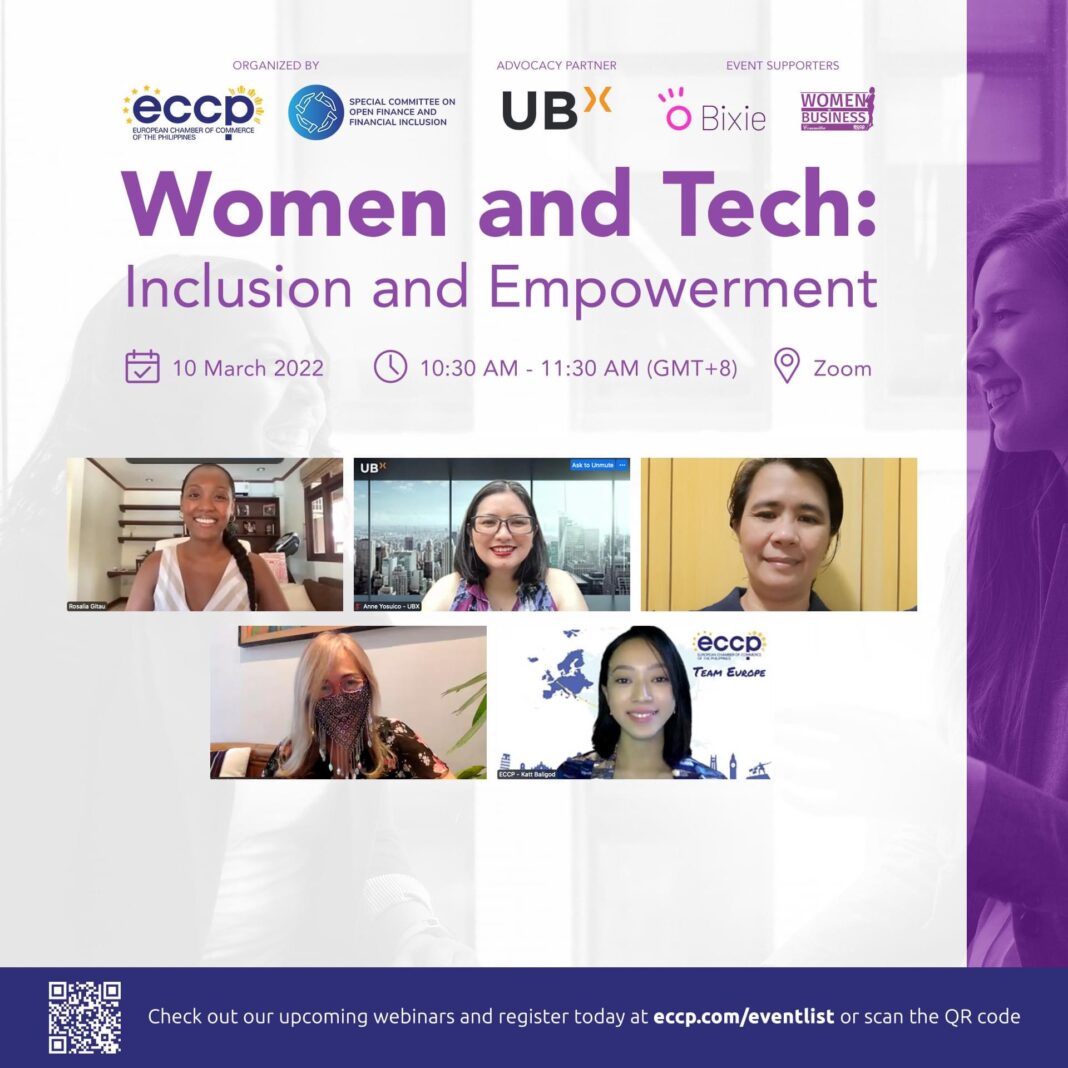 The Philippines should prioritize the inclusion of women in the financial systems to empower them leading households, communities, and the broader economy towards a growth path that could generate greater gains for the country.

During the Women and Tech: Inclusion and Empowerment Webinar hosted by the European Chamber of Commerce of the Philippines (ECCP), women leaders of open finance champion UBX, AI-powered finance platform Bixie, and humanitarian agency Catholic Relief Services (CRS) urged both the public and private sectors to empower women by including them in the country’s financial systems, as they are key to unlocking the growth potential of the economy.

UBX, Bixie, and CRS have joined hands to further democratize access to financial services for the roughly 54.5 million Pinays in the country.

“Studies have shown that when you enable women and their families, the development is a ripple effect — from women to their families to the communities and to the economy,” UBX Managing Director for Banking Services Anne B. Yosuico said. “Female household leaders are the ones driving real change in their families and communities and therefore the economy. Hence, we should start developing mechanisms that allow them to have greater access to capital.”

UBX, a champion for financial inclusion, since day one has been pursuing the empowerment of women entrepreneurs and individuals by providing them with digital tools and services that give them access to financial ecosystems.

As the leading open finance platform in the Philippines, UBX equips women with financial tools such as: loans to build or grow their businesses through SeekCap; access to cryptocurrencies through the Cardano staking pool; and the power to offer banking services through i2i, among others.

For her part, CRS Program Manager for Disaster Risk Reduction Maila Quiring said her group has enabled over 2,200 Filipinas in 880 groups through the Savings and Internal Lending Communities (SILC) Program.

SILC is a holistic, savings-led microfinance approach that provides a safe place for poor households to save and borrow to increase their income, helping members better manage their existing resources by teaching them basic financial management skills.

“After two years of being formed in one barangay in Angono, Rizal, SILC was able to empower women such that fewer people sought for government assistance simply because SILC members and groups helped each other,” Quiring said.

Meanwhile, Bixie Founder and CEO Rosalia Gitau said empowering women in the Philippines and the world will lead to a “revolution” of unprecedented growth, noting that “When women lean on one another, we survive. But when we empower one another, we thrive”.

Citing a study from Harvard Business Review, Gitau said women are the largest excluded group from finance, accounting for anywhere between $3 trillion and $5 trillion in market gap.

“We are the largest growth market in finance,” Gitau said. “Women are worth $40 trillion in decision making in the global economy. We have 40 percent of all of the world’s wealth and we make 80 percent of all buying decisions in the household.”

Bixie is a digital platform that empowers women to save and invest by providing them the knowledge to gain confidence, the network to find support, and the tools to take action. Bixie offers a digital ledger that provides women insights on spending, a digital community center, as well as materials that educate women about finance.

Aside from these services, Bixie also partners with humanitarian groups to distribute financial aid to women in places like the Philippines.

“When you give money to women, it trickles down to the household and the communities,” Gitau said. “By educating women — giving them the base level of capital — you can actually revolutionize the GDP growth of countries.”

“The impact is enormous. The business case that we’re making is not just a fundamental human right to integrate women into the global economy, it’s big business and it’s going to have huge implications,” Gitau added.