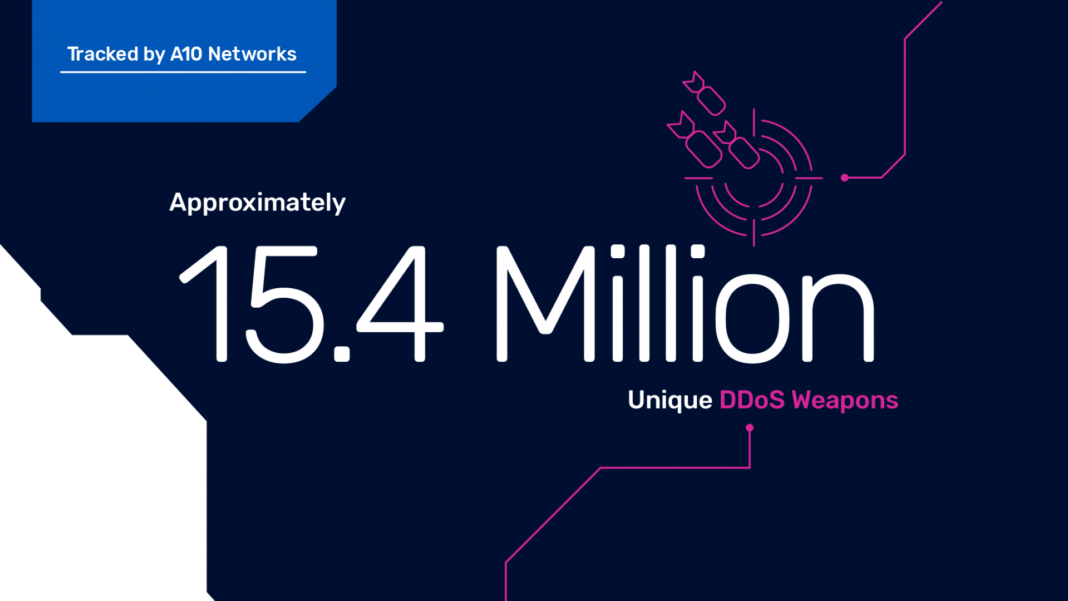 It is well-reported that the pandemic caused a spike in cyberattacks, including malware, ransomware and DDoS attacks. Threat actors have sought to disrupt not only services people rely on everyday like healthcare, education and financial but also critical infrastructure, like food supply chains, utilities and government agencies. Correspondingly, there has been a dramatic increase in the weapons that can be used to launch these attacks. In the 2H 2021 reporting period, A10 Networks security research team tracked over 15.4 million DDoS weapons in 2021. Recently, A10 Networks’ threat intelligence detailed the use of DDoS attacks to disrupt infrastructure and communications in Ukraine in February 2022 just as Russia launched its ground attack.

These, and other trends, are included in the 2022 A10 Networks DDoS Threat Report, which provides detailed insights, including the origins of DDoS activity; the growth of DDoS weapons – the computers, servers and IoT devices that can potentially be used in DDoS attacks – and botnets; the role of malware in the propagation of DDoS weapons and attacks; and the steps organizations can take to protect against such activities.

The guidance, while aimed at U.S.-based organizations, details a sense of urgency for organizations globally to reevaluate their security posture. Employing Zero Trust principles can not only protect networks but also ensure that they are not being used to launch attacks. A10’s security-led solutions for DDoS protection, TLS/SSL inspection of encrypted traffic and application delivery security capabilities can provide identity-based and context-based Zero Trust policies for specific enforced access.

“Recent events underscore the often devastating impact that cyber attacks have on governments and businesses around the world. A10 Networks tracks the origins of DDoS weapons activity, in addition to other attack vectors, in order to arm customers with useful threat intelligence. This is a critical component of a Zero Trust framework to help organizations better anticipate and mitigate cyber attacks, and also ensure networks are not inadvertently being weaponized,” said Dhrupad Trivedi, president and CEO of A10 Networks.

As a testament to A10’s technology innovation, Frost & Sullivan recently evaluated A10’s DDoS protection solutions, along with several other vendors, and awarded A10 the “2021 Frost & Sullivan Customer Value Leadership award for global DDoS mitigation, for excellence in best practices.”

In addition, to further support our customers’ cybersecurity needs and contribute to global solutions to cyber threats, A10 recently joined the Microsoft Intelligent Security Association (MISA), which is an ecosystem of independent software vendors and managed security service providers that have integrated their solutions to better defend against a world of increasing threats. More detailed results are available in the full 2022 A10 Networks DDoS Threat Report.

A10 Networks (NYSE: ATEN) provides secure application services for on-premises, multi-cloud, and edge-cloud environments at hyperscale. Our mission is to enable service providers and enterprises to deliver business-critical applications that are secure, available, and efficient for multi-cloud transformation and 5G readiness. We deliver better business outcomes that support investment protection, new business models and help future-proof infrastructures, empowering our customers to provide the most secure and available digital experience. Founded in 2004, A10 Networks is based in San Jose, Calif. and serves customers globally. For more information, visit www.a10networks.com and follow us @A10Networks.