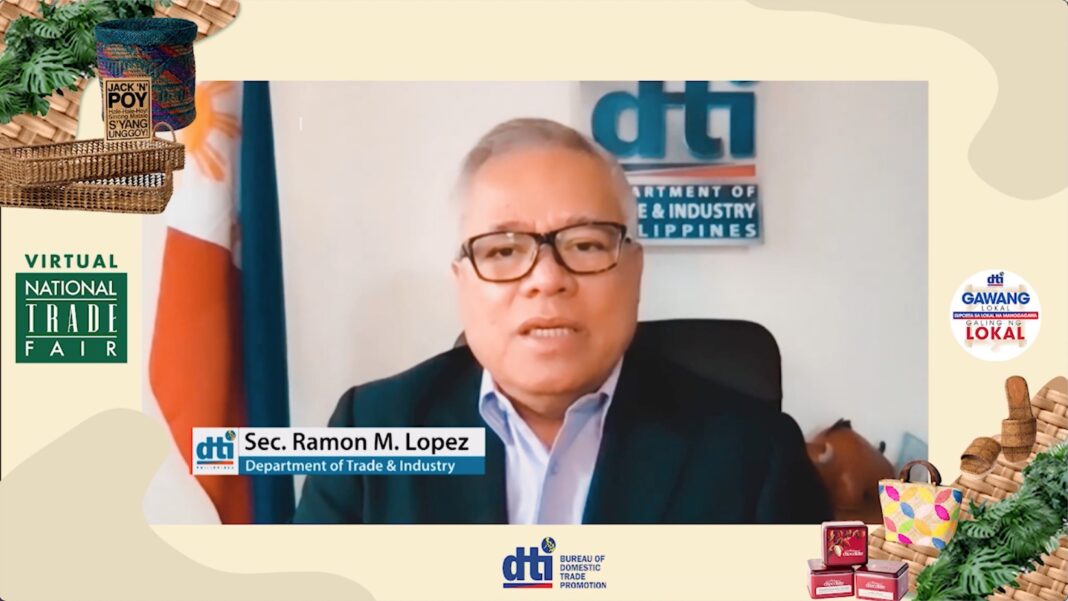 The 1st Virtual National Trade Fair was officially opened on Wednesday, January 27, through an online ceremony. Attendees from remote locations witnessed the event on the website virtualnationaltradefair.dti.gov.ph and on social media channels.

In his keynote address, Department of Trade and Industry Secretary Ramon Lopez lauded the Filipino “bouncebackability” to endure extreme hardship by finding silver linings and hidden blessings in adversity. In addition to citing brighter economic prospects for 2021, Sec. Lopez also noted the DTI’s role as a primary economic catalyst, saying: “Today’s opening of this Virtual National Trade Fair is part of the Department’s pivot to digital, and very much in keeping with the buzzwords in our mission statement, which are: innovative, competitive, job-generating, inclusive, and empowering.”

Meanwhile Undersecretary Abdulgani Macatoman of the Trade Promotions Group pointed out that the domestic trade fairs carry a rich tradition of success for MSMEs, noting that in 2019, the three fairs organized that year had 115,000 visitors and generated PHP 193.44-million in revenues for 782 exhibitors.

Further, Usec. Macatoman noted that the Virtual National Trade Fair represents a move to the online world, in keeping with the demands of the times, saying: “Through this digital transformation, we are taking the initiative so our MSMEs can continue to expand their market presence not just in the domestic market but now in the borderless online marketplace.”

For her part, Undersecretary Blesila Lantayona of the Regional Operations Group struck an upbeat note in her inspirational message, noting: “2021 holds much promise as we kick off the year with an event that we hope will give our MSMEs the much-needed boost to jumpstart their recovery. Moreover, bringing the National Trade Fair to the digital realm serves as another significant milestone for our MSMEs as they establish their market presence on an e-commerce platform. This opens up a world of possibilities, as our MSMEs become more accessible not only to domestic consumers but also to international buyers.”

Bureau of Domestic Trade Promotion Director Marievic Bonoan emphasized the B2B nature of the event as a venue to showcase the best products from the regions so MSMEs can secure bulk orders from institutional buyers from department stores, supermarket chains, hotels and restaurants, and even export consolidators.  Product categories include fashion accessories and wearables, food and beverages, gifts and souvenirs, health and wellness, and home and living.

From January 27 to February 2, 2021, the Virtual National Trade Fair will be accessible online 24/7. On the first four days of the fair from January 27 to January 30, exhibitors will man their booths virtually during show hours from 10AM to 6PM. At that time, visitors can do real-time chats, meetings, and video calls. Beyond show hours and in the following days from January 31 to February 2, visitors can continue to visit the booths anytime and leave a message for the exhibitor.

The Virtual National Trade Fair is open to the public, and admission is free. Simply visit virtualnationaltradefair.dti.gov.ph and fill in your registration details. Be informed about the latest updates by following @virtualnatltradefair on Facebook and Instagram.

The Virtual National Trade Fair is organized by the Department of Trade and Industry’s Bureau of Domestic Trade Promotion (DTI-BDTP) in collaboration with the DTI Regional Operations Group. For more information about the DTI-Bureau of Domestic Trade Promotion, please follow their social media accounts @BDTP on Facebook, Instagram, and Twitter. You may also email bdtp@dti.gov.ph.