After more than a decade of absence in the local music scene, The Bernadettes return with a new single under Lilystars Records.

Their latest song “Worthless Beautiful” is another fuzzy, garage rock anthem in the similar vein as their breakout 2009 single “Let’s Make Babies,” but this time, the band documents life under the old normal, reminiscing about drinking the night away with like-minded individuals and enjoying freedom in the best way possible. 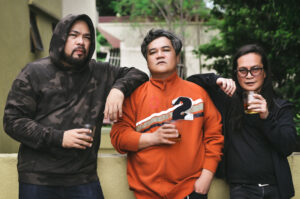 Lead vocalist Paolo Angeles shares, “Worthless Beautiful” deals with freedom in doing the things you want, the way you want it; no matter how wrong it might feel. The result may be worthless, but there is beauty in its pursuit.”

With the uncertainty of the pandemic affecting the way people lead their lives, “Worthless Beautiful” may come off as a distillation of nostalgia, joy, and helplessness, all rolled into a party that never was. But things are different now, and the sentiments in the song only serve as a figment of a distant memory, a rallying cry in our self-imposed quarantine, a gut-deep wallowing in self-pity.

Taking into account the current social context, The Bernadettes’ latest track functions as both a pre-pandemic recollection and a bittersweet reminder of those years that held promises of eternal youth and fun—snotty punk rock and all.

“Worthless Beautiful” is the first of the four songs that the band has already finished recording with producer Dok Sergio at JNR Studios. According to Paolo, the alternative rock outfit is slated to release a full-length album next year. “The plan is to have the other 3 songs remastered and have them released intermittently,” The Bernadettes’ frontman reveals in a statement. “Of course, we would need to go back to the studio to record more songs. Maybe after the pandemic.”

“Worthless Beautiful” is now out on all digital platforms worldwide via Lilystars Records.