Great Wall – which is actually a system of walls from various dynasties – go back more than 2,200 years. Each of the five different editions that make up the Montblanc High Artistry, A Tribute to the Great Wall collection takes its design inspiration from cultural themes associated with the wall’s long history, brought to life through various forms of ancient craftsmanship including goldsmithing, hand engraving, lacquering, enameling, embroidery, precious stone setting, and metal skeleton sculpture.

Considered one of the purest and greatest arts, calligraphy or the art of beautiful writing is a highly respected skill in China even today. For centuries, people have marvelled at the aesthetic of the characters and the artistry of the calligraphers. The Montblanc High Artistry Tribute to the Great Wall Limited Editions 1, 5, 10 and 88 honour this ancient art form. Not only is the overall shape of the writing instrument inspired by a calligraphy brush, the edition features a curved nib with a tip that has a 45° angle that makes it possible to create lines of different thicknesses at various angles. Showcasing a new technology used for the first time ever by Montblanc, the handcrafted solid 18K gold nib is adorned with a 3D relief of the Great Wall.

The Montblanc High Artistry Tribute to the Great Wall Limited Edition 1 Imperial, a magnificent fountain pen evokes a dramatic vision of the Great Wall twisting like a massive stone dragon over a vast landscape. Inspired by traditional Ming dynasty artwork, the dragon metaphor comes to life on the Au750 solid yellow gold cap and barrel in a pavé of sapphires, rubies, tourmaline and diamonds ranging in colour from yellow and red to shades of blue and turquoise.

As a homage to the traditional royal instrument used in Chinese rituals and court music, a hand crafted miniature music box that plays music inspired by the sound of chime bells has been masterfully placed within the cone of the writing instrument and is decorated with pavé-set blue sapphires. A 4.69ct brilliant cut diamond crowns the edition set in the skeletonized and hand engraved Au 750 solid gold cap top, symbolising a dragon’s claws holding the diamond. A Chinese guardian lion, traditional symbol of protection as powerful as the Great Wall itself, is depicted in a 3D hand engraving on the Au 750 solid yellow gold movable clip. 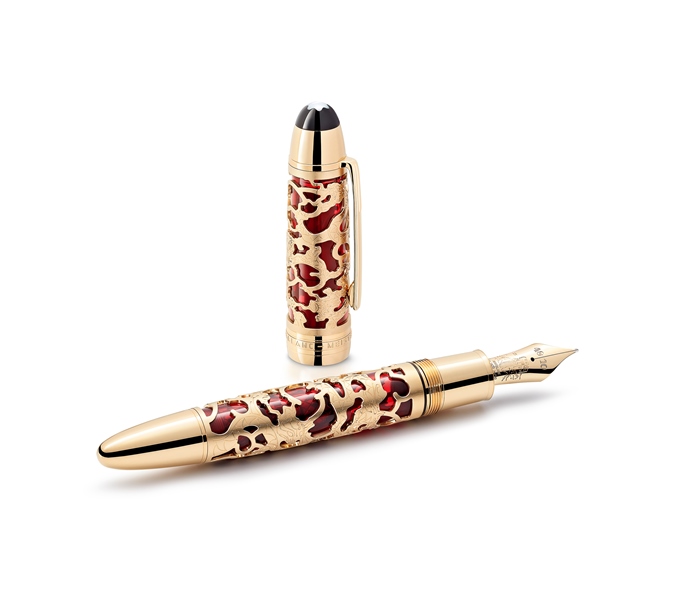 The Montblanc High Artistry Tribute to the Great Wall Limited Edition 5 Imperial captures all the beauty and craftsmanship of the Ming dynasty (1368-1644), a period that changed the face of China, as well as the Great Wall itself. Chinese art and culture flowered during this time, giving rise to many traditional artworks associated today with high Chinese culture.

An expression of this tradition, enamel cloisonné and champlevé techniques have been used to achieve the colourful decorations on the cap and barrel of the writing instrument, evoking elaborate Ming enamel painted vases. A skeletonized and hand engraved cap top inspired by imperial hat jewellery from the era opens to reveal a precious approx. 1.8 carat brilliant-cut diamond.

As a special feature of the edition, the cone contains a calligraphy brush made of squirrel hair stabilised with translucent lacquer. This part can be exchanged with a real brush so that the writing instrument can be repurposed as a Chinese calligraphy brush. Traditional symbol of protection as powerful as the Great Wall itself, a 3D hand engraving of the Chinese guardian lion adorns the Au 750 solid yellow gold movable clip. As a reference to one of the many tales from the Great Wall, the revolving barrel ring of from precious Kalahari jasper is delicately engraved with the legendary tale of the brick that holds the wall together.

By extending the wall, the emperor of the Han dynasty intended to ward of constant threats to his empire, and protect China’s fledgling Silk Road, a cultural and trade bridge between Orient and Occident. 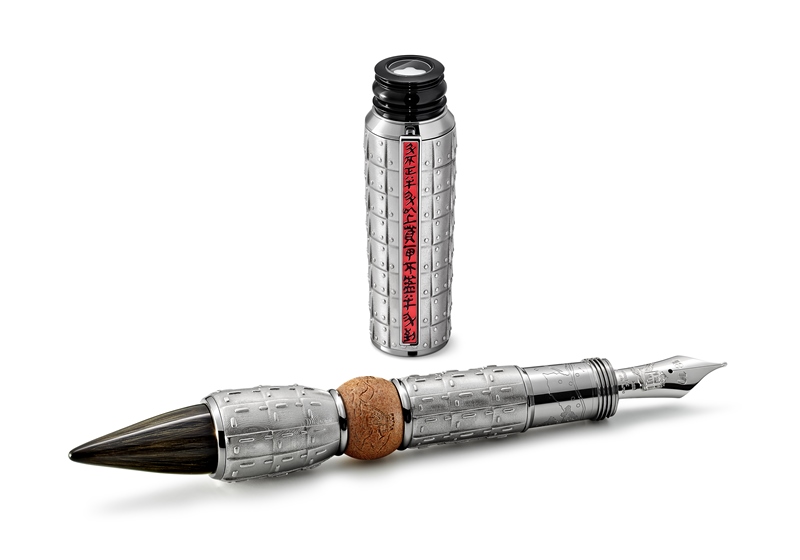 Dedicated to the material that gave the ancient trade route its name, the barrel of the Montblanc High Artistry Tribute to the Great Wall Limited Edition 10 highlights the craft of silk embroidery, with delicate handcrafted gold stitching embroidered onto the barrel depicting the Great Wall from the Han dynasty. Mother-of-pearl, another material transported along the Silk Route, adorns the cap as plates held by solid gold pins in a design that echoes Han dynasty royal burial shrouds. The cap is crowned with a Montblanc interpretation of an inkpot, as traditionally used by calligraphers. The PVD-coated pot contains the Montblanc emblem in white Teflon surrounded by floating ink and covered with sapphire glass.

The upper part of the cone is set with black sapphires and diamonds, and the cone is remodelled as a calligraphy brush, made of goat and synthetic hair, stabilized with translucent lacquer. The Au 750 solid champagne-tone gold clip with a wood inlay is lasered with Chinese symbols reminiscent of the narrow bamboo strips that scribes used to write or draw on. The fine engraving on the precious Kalahari jasper revolving barrel ring is dedicated to the tale of Lady Meng.

Qin Shi Huang, the founder of the Qin dynasty and the first emperor of China, commanded that, in place of several small walls, one long wall be constructed to defend the empire against nomadic riders from the north. The design of the cap and barrel of the Montblanc High Artistry Tribute to the Great Wall Limited Edition 88, made of Au 750 solid white gold, is inspired by the armour of the warriors who defended the Chinese Empire. 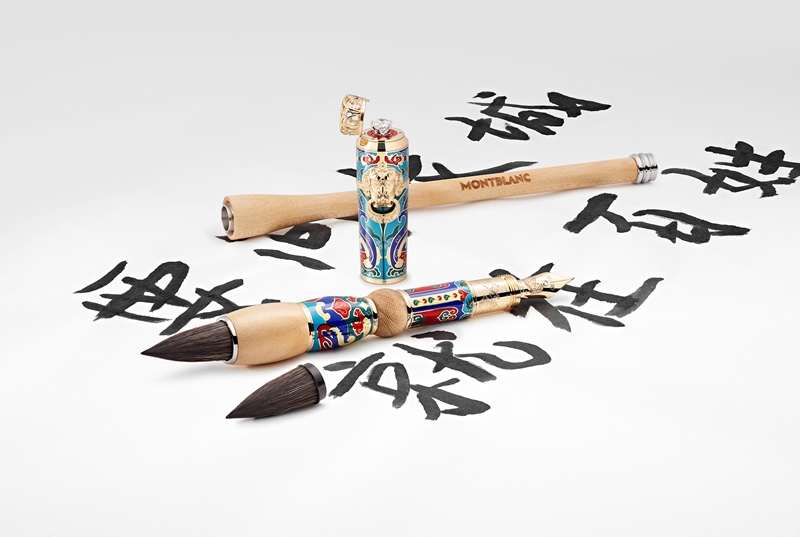 The rough surface of the edition is reminiscent of the typical rough surfaces of the bronze artwork crafted during the Qin dynasty. The importance of calligraphy is highlighted by the overall shape of the writing instrument, the cone hand-lacquered to mirror the appearance of the calligraphy brush hair, as well as the cap crowned with the interpretation of an inkpot, with the PVD-coated pot containing the Montblanc emblem in white Teflon.

The Au 750 solid white gold clip with black PVD coated Chinese symbols and red lacquer inlay depicts the narrow bamboo strips that scribes used to write or draw on. The precious Kalahari jasper barrel ring is engraved with a design inspired by the tale of the beacon towers.

It is often said that the Great Wall twists and turns across China like a gigantic dragon, protecting the country just as an emperor would protect his empire. Symbolic of the way the wall winds protectively around China, the Au750 solid yellow gold skeleton overlay coils dragon-like around the Meisterstück 149 fountain pen, decorated with nine dragon motifs, a good number in Chinese culture and strongly associated with the Chinese dragon, a symbol of magic and power.

The first ever High Artistry Meisterstück Skeleton with a limitation number of 333 pieces, the edition incorporates the symbolic colours red and yellow in a multilayer effect created by a deep-red translucent lacquer underlay beneath an Au 750 solid gold skeleton overlay. Red represents fire, as well as happiness, beauty, vitality, good luck, success and good fortune. Yellow symbolises royalty and is traditionally reserved for the emperor. The handcrafted Au750 solid yellow gold nib bears an engraving of a tower inspired by the famous signal towers of the Great Wall, while the Montblanc emblem in mother-of-pearl crowns the cap top of the edition.

An imposing structure and a source of admiration around the world, the Great Wall and its rich history are part of the cultural fabric of China. As the Chinese saying says, “Ask where the Great Wall is, it is in the hearts of the people.” Montblanc revisits the unforgettable tales of the Great Wall once more, told through the precise skill and unbridled creativity of its artisans.