Senator Imee Marcos has called on the Department of Energy and the country’s three largest oil companies to “put people ahead of profit” and suspend oil price hikes set for Tuesday. 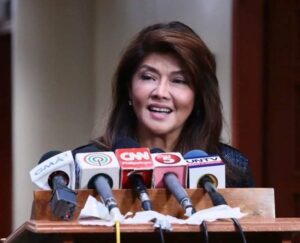 Marcos, who chairs the Senate committee on economic affairs, said  financial difficulties amid the Covid-19 pandemic and recent calamities called for an oil price freeze, particularly in provinces where relief efforts were ongoing due to typhoons Quinta, Rolly and Ulysses.

“Where is your conscience at a time when people are crying out for help?” Marcos asked.

The DoE said it granted local oil price increases because global market prices had spiked on positive news that a Covid-19 vaccine could soon be available.

However, Marcos cited that crude oil prices were nowhere near their levels before the World Health Organization declared Covid-19 a pandemic.

“The Big Three oil companies seem to owe us a discount. Since January, they have lowered diesel prices by less than 40%, even when Middle East crude prices went down by more than 82%,” Marcos said.

Marcos added that the price of WTI crude, one of the main global oil benchmarks, even plunged into negative territory in April.