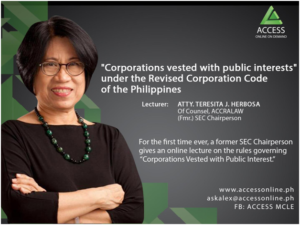 Herbosa, who ranked 16th among the successful examinees in the 1977 Bar Examinations is now a professor at the University of the Philippines College of law and De La Salle University College of law. Prior to serving as the SEC Chairperson from 2011 to 2018, she engaged in private practice of law at the Angara Abello Concepcion Regala& Cruz Law Offices (“ACCRALAW”) specializing in litigation and dispute resolution for 33 years.  She has rejoined ACCRA as Of Counsel in 2019.